Nevada Exploration Inc. (“NGE” or the “Company”) (TSX-V: NGE; OTCQB: NVDEF) is pleased to report that the results of a 124 sq km air magnetic geophysical survey project a large area of favourable lower-plate carbonate host rocks beneath the cover at the Company’s South Grass Valley Project (the “Project”).  These new results provide strong additional support for the Carlin-type gold deposit (“CTGD”) target at the Project, defined by a focused zone of enriched gold in groundwater coincident with the projected intersection of favourable lower-plate carbonate host rocks and a major high-angle fault corridor.

Discussing the results, NGE’s CEO, Wade Hodges explains: “Our exploration model at the Project is to test the combination of enriched gold in groundwater with the projections of favourable host rocks and structure.  Our detailed hydrogeochemistry borehole program has constrained the extent of the gold-in-groundwater enrichment, and the gravity geophysics has given us a good handle on the location of the structural corridor.  The primary purpose of the air magnetic survey was to project the extent of the thick sections of lower plate containing CTGD-style alteration and geochemistry under cover from where we see them exposed in outcrop, which it achieved.  We are very pleased with the results as they have provided another important cross-hair to focus our planned deeper drilling program to now test for gold mineralization within these favourable lower-plate host units.”

With this updated exploration model, NGE expects to be able to focus its planned deeper drilling at the Project to test for gold mineralization within these favourable lower-plate bedrock host units.

In late March 2018, EDCON-PRJ, Inc. completed a 991 line-km fixed-wing airborne magnetic survey for the Company across the Project, covering 124 sq km.  At the regional scale, the results of the survey show a pronounced NW-SE fabric, consistent with the strike of the fold axes known to control mineralization elsewhere along the Cortez Trend, including at Barrick’s Goldrush deposit.  At the project scale, the magnetic response across the exposed bedrock areas shows a strong correlation with mapped units, specifically with the higher-magnetic intrusive and volcanic units, and the lower-magnetic carbonate units, which provides confidence in the interpretation of the survey across the covered bedrock areas. 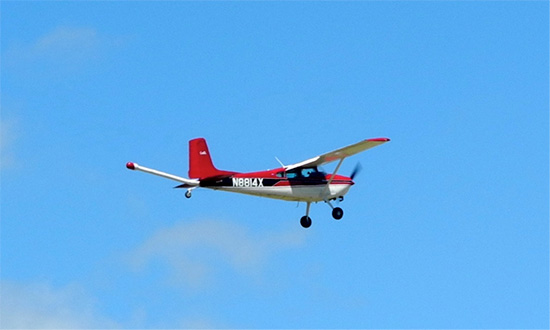 Based on the projections of the exposed geology and the survey results, the combined interpretation has resolved the covered portion of the Project into separate geologic domains.  Most significantly, the survey defined a 15 sq km magnetic low extending under cover from an exposed bedrock outcrop containing a thick sequence of lower-plate carbonate host rocks, which NGE believes provides additional evidence to support the projection of these favourable host rocks beneath the Project. 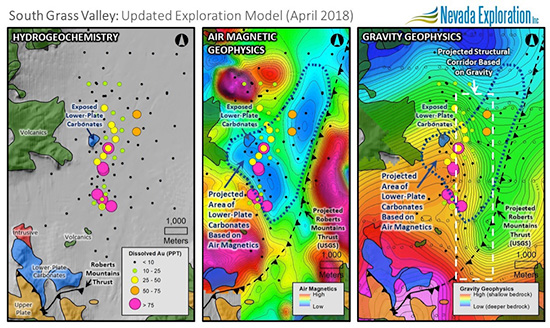 Two bedrock outcrops spaced 5 km apart at the Project exhibit CTGD-style alteration and geochemistry within a 700-metre-thick sequence of lower-plate carbonate host rocks immediately below the Roberts Mountains Thrust.  Based on gravity geophysics and the March 2018 air magnetic geophysics, these favourable host rocks project under relatively shallow cover across a large portion of the Project.  This large area of favourable geology is intersected by a N-S high-angle fault corridor that projects under the cover from the exposed range front (based on mapping and gravity geophysics), providing a potential major conduit to expose the known favourable host rocks to mineralized hydrothermal fluids.

From November 2017 to January 2018, NGE completed 69 infill groundwater sampling boreholes at South Grass Valley to follow up on a gold-in-groundwater anomaly identified during a regional-scale, generative exploration program.  The objectives of NGE’s infill program were to establish the extent, size, and magnitude of the gold-in-groundwater footprint at South Grass Valley, its relationship to the larger prospective geologic setting, and to constrain the target for a deeper drilling program.  In total, NGE has now completed 135 boreholes across the Project area, collecting samples from most boreholes at multiple depths, for a total of 234 groundwater samples.

The results of NGE’s infill borehole program have defined a 1,000 x 4,000 metre N-S oriented zone of enriched gold, arsenic, antimony, barium, thallium, tungsten, and sulfate in groundwater, representing a hydrogeochemistry footprint consistent in size and magnitude (with gold up to 800 times background) as those seen around Lone Tree and Twin Creeks, large known gold deposits on the Cortez Trend, as well as at NGE’s Kelly Creek Project.  Importantly, this zone of enrichment is coincident with the projected intersection of the major N-S high-angle fault corridor and the favourable lower-plate carbonate host rocks.

Based on the size of the zone of enriched gold in groundwater footprint and the size of the area of projected lower-plate host rocks intersected by the high-angle fault corridor, NGE believes that the target is large enough to support a district-scale mineral system, and is now suitably constrained for a focused deeper drilling program to evaluate the potential for economic mineralization.

Readers are encouraged to review the most recent technical presentation on the Project. Click here

NGE is an exploration company advancing a portfolio of new district-scale gold exploration projects along Nevada’s Cortez Trend.  NGE is led by an experienced management team that has been meaningfully involved in several significant discoveries in Nevada, including the discovery of Lone Tree and Rabbit Creek (part of the Twin Creeks Mine).  NGE’s team has spent the last decade integrating the use of hydrogeochemistry with conventional exploration tools to develop a Nevada-specific regional-scale geochemistry exploration program.  With innovative technology, NGE has completed the world’s largest groundwater sampling program for gold exploration, collecting approximately 6,000 samples to evaluate Nevada’s covered basins for new gold exploration targets.  To advance follow-up targets, NGE has overcome the high drilling costs that have previously prohibited the wide-spread use of drilling as a prospecting tool by developing its Scorpion drill rig, a small-footprint, truck-mounted, small-diameter RC drill rig specifically tailored to the drilling conditions in Nevada’s basins (analogous to RAB drilling in other parts of the world).  By integrating hydrogeochemistry and early-stage low-cost drilling with conventional exploration methods, NGE is overcoming the challenges and radically reducing the costs of exploring in Nevada’s covered basins, and taking significant steps to open this important new search space up for district-scale exploration.