The Awakening project is located in Humboldt County, Nevada, 50 kilometres north-northwest of Winnemucca, and approximately 4,000 metres north of the 4.8-million-ounce Sleeper Gold Mine, which produced 1.66 million ounces from 1986 to 1996 and has a remaining measured and indicated mineral resource of 3.14 million ounces (297 Mt at 0.33 g/t Au).  The area is largely covered by syn- to post-mineral volcanic units and post-mineral alluvium, and as a result the project has seen limited historic exploration activity. 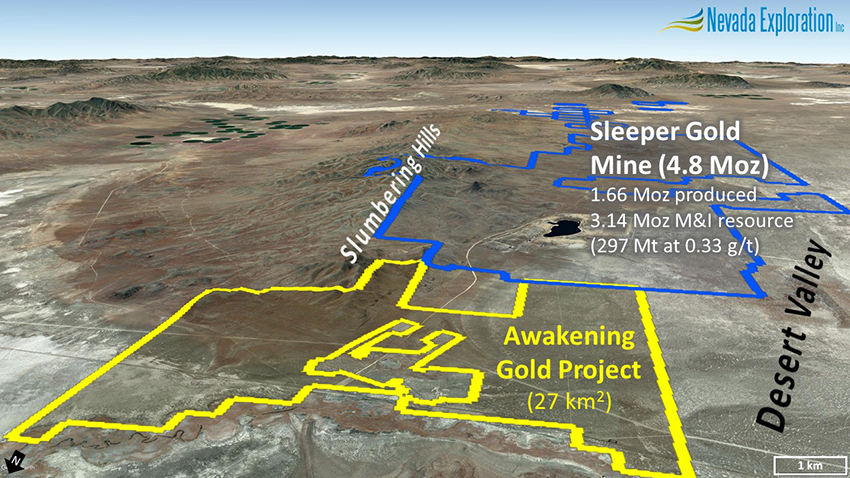 Nevada Exploration generated the project based on elevated concentrations of gold and related pathfinder geochemistry identified in groundwater as part of its basin-scale, hydrogeochemistry-supported, generative exploration program across the larger Desert Valley.

Following up from the results of its generative program, Nevada Exploration and an early partner at the project (the Company now owns the project 100%), have advanced the project by completing a progressive series of district-scale geochemistry, geophysics, and orientation-drilling programs to build a comprehensive exploration dataset to target Sleeper-style mineralization.

Based on the combined data, Nevada Exploration believes it has established support that the favourable lithological, structural, and alteration features associated with the mineralization at Sleeper continue northward, under relatively shallow cover at Awakening, coincident with anomalous gold in groundwater.  The company expects the next phase of work at the project will integrate the results of the multiple work programs to build a robust geologic model for the purpose of defining and prioritizing specific exploration targets for the next phase of drilling.

The project sits on the western flank of the Slumbering Hills, along the northern projection of the prominent north, north-northeast, and northwest trending structural fabric that provides an important control for 15.5-16.5 Ma low-sulfidation epithermal-style Au, Ag mineralization at Sleeper to the south.  In addition to the superposition of multiple, structurally-controlled stages of mineralization, elevation has also been established as an important control for mineralization at Sleeper.

Based on preliminary mapping and drilling, the dominant lithology under the gravel at the project is a series of rhyolitic flows, flow domes, and tuffs related to the Sleeper Rhyolite, which is the primary ore-host at the Sleeper mine.  The depth to bedrock ranges from 12 to 240 metres, averaging 80 metres.

The target concept at Awakening is that of mineralized zones of alteration along the northern extension of the geologic features that control the high-grade gold mineralization at Sleeper, which continue to project beyond the current mineral resource.  Specifically, Nevada Exploration’s efforts are focused where the geophysics and early drilling at Awakening suggest that the major structural damage zones associated with the hydrothermal system at Sleeper project northward, intersecting favourable lithologic units at favourable elevations, under relatively shallow cover, coincident with anomalous soil and groundwater chemistry.

To establish the extent of the enriched gold and related trace-element hydrogeochemistry identified during the original generative program, Nevada Exploration competed an infill groundwater-sampling program consisting of more than 60 purpose-drilled boreholes.  The results of the infill program showed at least two discrete zones of enriched gold in groundwater, both located along the northern projection of the Sleeper fault system.

To test for the presence of gold and related trace elements in a second sampling medium, the Company proceeded to complete a large, 1,830-sample soil geochemistry program across the majority of the project.  The results of the soils program defined a series of discrete, N-S oriented clusters of elevated gold and pathfinders, thus confirming their presence in a second sampling medium, and highlighting the potential for the largely N-S structures that control the mineralization at Sleeper to host additional mineralization as they project northward at Awakening.

As the project advances, Nevada Exploration believes both the groundwater and soil geochemistry datasets will be important inputs when combined with the geologic information based on mapping and geophysics to focus the next phase of drilling.

To improve the projections of the major geologic features under cover at Awakening, Nevada Exploration and its early partner have completed gravity, air magnetic, and IP/resistivity surveys across the project.

The Company collected gravity data on a 400 x 400 metre grid, with tighter density at the centre of the project, for total coverage of 85 km2.  The gravity survey was designed to estimate the depth to metasedimentary and granitic bedrock, potential thickness of preserved rhyolitic volcanic rocks, and the location and orientation of prominent lithologic offsets that might be indicative of major fault zones.  The results successfully identified significant areas where the prospective lithologic units are expected to be within potentially-economic depths, as well as areas of high relief that potentially mark the locations of major block faulting, and specifically areas where prospective rhyolitic volcanic rocks may be preserved beneath the alluvial cover.

To complement the gravity data and further examine the relative changes in the covered bedrock at the project, Nevada Exploration completed a 1,460-line-kilometre air magnetic survey, with 150-metre spaced flight lines, 600-metre spaced tie-lines, and terrain clearance of approximately 100 metres, for a total coverage of 175 km2.  The air magnetic survey was designed to be used in conjunction with the gravity data to define magnetically anomalous volcanic lithologies potentially representing zones of hydrothermal and structural magnetite destruction that might be indicative of fault zones and hydrothermal alteration. 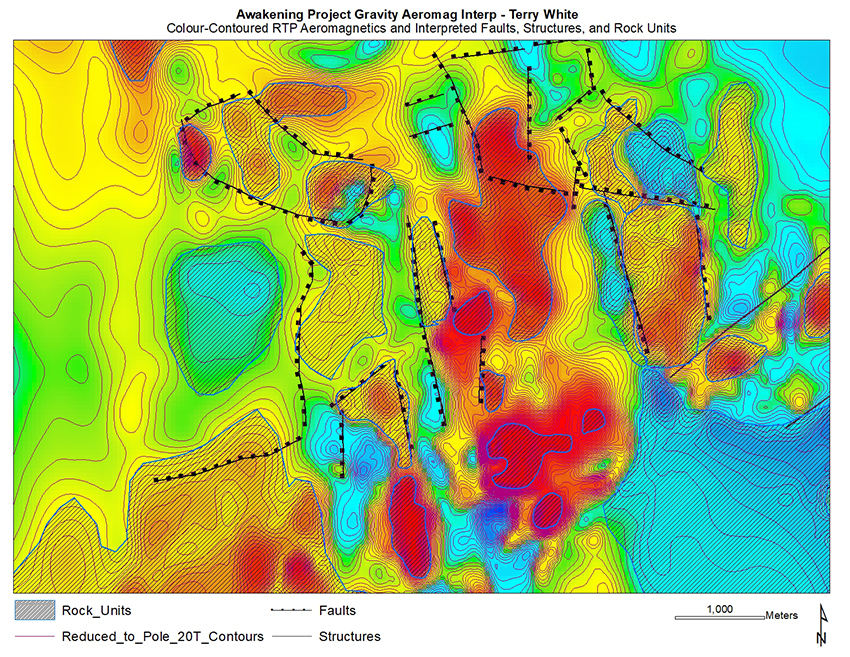 To provide an additional dataset for evaluating the depth to bedrock, lithologic contacts, and major structural features across the project, an IP/resistivity survey was completed, consisting of nine lines totalling 42 line-kilometres, oriented east-west, perpendicular to the approximately northerly-trending structural fabric extending north from Sleeper.  The results largely corroborated the depth-to-bedrock projections based on the gravity, and highlighted a series of parallel, high-angle, likely structurally-related features, consistent with the continued northern projection of the structural fabric associated with the mineralization at Sleeper.  When integrated with the gravity and air magnetic datasets, the interpretation of the IP/resistivity has provided a preliminary geologic model across this otherwise largely-covered project. 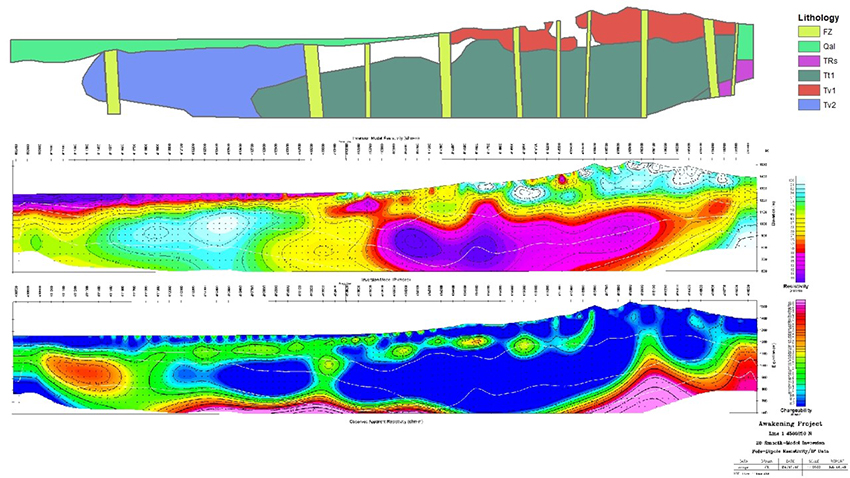 In all, the results of the three geophysical surveys suggest a pronounced, generally north-oriented, structural fabric cutting through varied rock types, containing a series of also N-S oriented magnetic lows, possibly related to zones of altered volcanic bedrock – together representing the same types of features and geophysical responses associated with the mineralization and alteration at Sleeper to the south.

Nevada Exploration and its former exploration partner have completed a total of 24 relatively-shallow core, reverse-circulation, and mud-rotary drill holes, totalling 4,668 metres (average depth 195 metres), to orient the combined exploration datasets for the purpose of improving the Company’s understanding of the nature and prospectivity of the covered bedrock across the project. 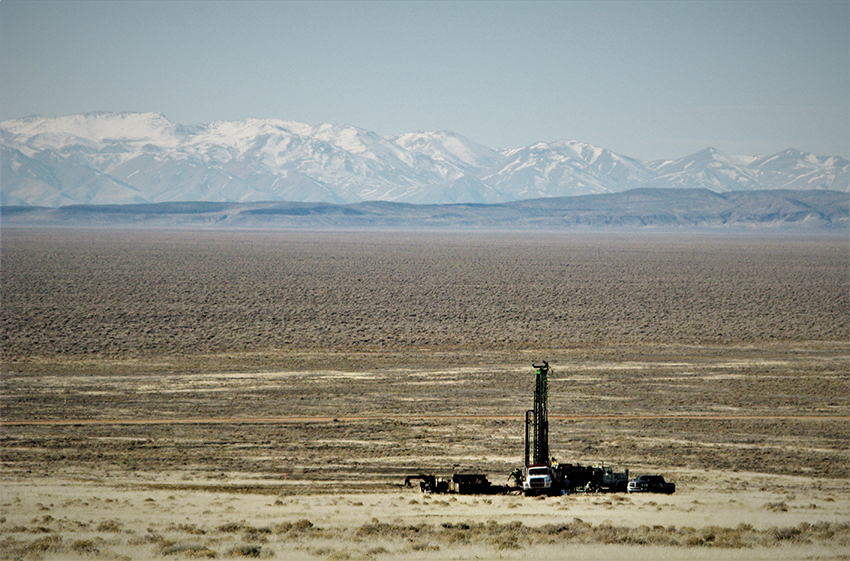 This initial wide-spaced drilling confirmed the presence of shallow, hydrothermally-altered bedrock units at Awakening similar to those hosting the mineralization at Sleeper.  These units contained evidence of high-angle structures and intervals of weak to moderate oxidation containing anomalous gold and silver concentrations, which together support Nevada Exploration’s structural and geochemical projections of similar features seen at Sleeper.  By reviewing the physical rock property measurements collected from the drilling samples (magnetic susceptibility and density), the Company expects to continue to further integrate the drilling data with its mapping and geophysical datasets to improve the resolution of its geologic interpretations.

Through a comprehensive review and integration of the exploration datasets available, combined with whole rock analysis of several drill intercepts of interest, Nevada Exploration believes that it has focused the exploration target at Awakening to a trend of magnetic lows that continue northward from Sleeper (which is also located on a magnetic low), along the projected extension of the fault zones known to control the hydrothermal alteration and gold mineralization at Sleeper.  These projected structures from Sleeper are coincident with the structural interpretations defined by the air magnetic geophysics and the high concentrations of gold and supporting pathfinders in groundwater and soils, and together these features of exploration significance have defined a structural fabric and geochemical signature that narrow the area of exploration interest at the project.

With a now-focused exploration target concept, Nevada Exploration is leveraging in-depth research on the mineral controls at Sleeper, as well as the latest geologic modeling and analysis tools, to integrate all of the exploration datasets at Awakening to refine its geologic model to define and prioritize specific next-phase drilling targets.