Nevada Exploration Inc. (“NGE” or the “Company”) (TSX-V: NGE; OTCQB: NVDEF) is pleased to present its planned drilling program to advance the four Carlin-type gold targets it has identified at its South Grass Valley Project (the “Project”).  Guided by its latest geologic model, Nevada Exploration has designed a 9,500-metre, 23-hole reverse-circulation (“RC”) drilling program to achieve specific objectives at each of the four targets, with clear definitions of success.

As outlined in the Company’s news release dated September 19, 2019, the Company believes the Carlin-type mineral system it has discovered at its South Grass Valley Project has the architecture and scale to support multiple gold deposits, with the potential to host an entire new district.  By integrating: detailed mapping of and structural measurements from the nearby exposed bedrock; air magnetic and gravity geophysics; large soil and groundwater geochemistry sampling programs; and wide-spaced orientation core holes, Nevada Exploration has identified four discrete gold targets, defined by geologic settings analogous to those hosting deposits in Nevada’s three largest Carlin-type districts, and supported by gold and related pathfinders in multiple sampling mediums. 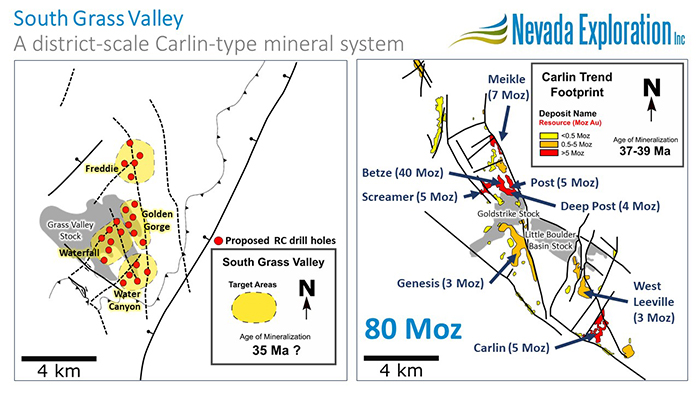 Discussing the Company’s next steps, NGE’s President, James Buskard: “We started with a blank canvas at South Grass Valley, and by integrating the best geoscience, guided by the latest research and recent discoveries at Nevada’s three major Carlin-type gold districts, our team has taken a systematic approach to advancing this otherwise-blind project.  Our generative and greenfield exploration program has been characterized as a “big company”-type effort in terms of its scope, and we have been rewarded by discovering Nevada’s largest new Carlin-type mineral system.  It is because of our big-picture approach, acquiring district-scale information at every stage, that we have built the wide-coverage of data and geologic context to have identified and now advance our four targets, each of which we believe has the potential to host a significant gold deposit.

“We’ve designed our next drilling program to test each target based on their specific geologic settings, with well-defined metrics for success, giving us a clear focus.  Importantly, we believe large portions of all of the targets are within the depth range of medium-sized RC drilling, which offers the potential to considerably decrease our drilling costs for this next phase of exploration.

“While there are other projects in Nevada that can check many of the same Carlin-type boxes, what differentiates South Grass Valley is the scale of the mineral system we’ve discovered.  Large districts are the products of large mineral systems, and with cubic kilometres of Carlin-type alteration, silicification, and geochemistry in bedrock, extending over more than 3.5 kilometres, which remains open, this is exactly what we’ve found.  We’re leading the industry in the search for the next Carlin-type gold deposits waiting to be discovered under cover in Nevada’s large valley basins, and these results strongly validate our program.   This is an exciting milestone for the Company, and we sincerely thank our stakeholders for their support as we continue to advance the Project.”

To provide additional context on the results outlined in the September 19, 2019, news release, and highlight the scope of the Company’s planned drilling program to advance the four South Grass Valley targets, NGE has prepared the following video: 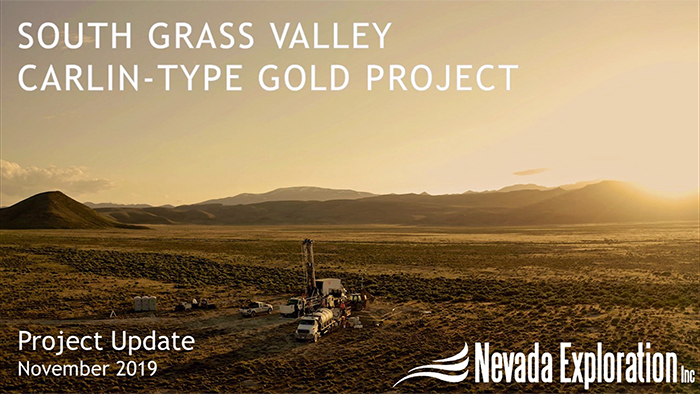 Water Canyon is located at the intersection of a NNW lineament, a NW fault fabric, and a NE fault, to the east of an historic adit and trench workings exposed in outcrop.  The reason NGE selected this particular favourable geologic setting as a target is the supporting presence of elevated Carlin-type pathfinders mercury and arsenic in soils above the target, and elevated gold, antimony, and arsenic present in the groundwater flowing past the target.

The concept to be tested at this target is that of typical Carlin-type mineralization located in favourable host rocks of the Roberts Mountains Formation beneath upper plate cap rocks. We also see potential in this area for high-grade mineralization in hornfelsed lower-plate carbonates (associated with the Grass Valley Stock intrusion) emplaced along a series of SE-plunging folds and structural trap sites.

To advance the target, NGE is proposing a 5-hole RC drilling program, for a total of 2,200 metres, to test for evidence of ponding, mineralized Carlin-type hydrothermal fluids in the low-angle trap sites sitting beneath a sequence of upper-plate cap rocks, as well as highly-anomalous gold and related pathfinders within the hornfelsed host rocks close to the Grass Valley Stock. 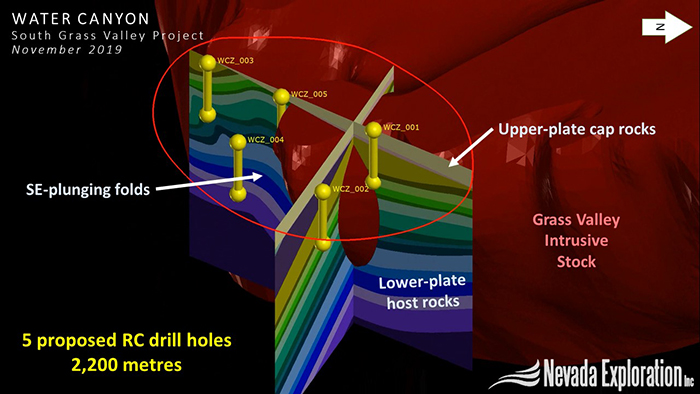 Success for this next stage of work at Water Canyon will be defined by intercepting Carlin-type gold mineralization and/or significant alteration containing secondary pyrite with highly-anomalous pathfinder elements.

Golden Gorge is located to the east of the Grass Valley Stock, where drilling has confirmed the presence of silicified and marbled breccias near the margins of the intrusion.  In addition to the geologic support provided by the drilling, this highly-favourable setting is further supported by the coincident alignment of the highest gold-in-groundwater concentrations seen at the Project, which closely map the interface between the lower-plate and the intrusion, as well as by the anomalous gold and pathfinder geochemistry intersected in the initial drilling.

The concept to be tested at Golden Gorge is that of potentially high-grade, oxide gold mineralization within the hornfelsed lower plate up against the intrusion, similar to the setting at Goldstrike, with the potential for additional gold mineralization in the oxidized and intensely-altered breccia units encountered at the bottoms of earlier holes SGVC004 and SGVC005.

To advance the target, NGE is proposing a 6-hole RC drilling program, for a total of 2,600 metres, to establish the extent of the hornfels aureole on the east flank of the intrusion and test it for evidence of mineralization, and to test the western extension of the altered breccias where initial drilling encountered highly-anomalous pathfinder geochemistry. 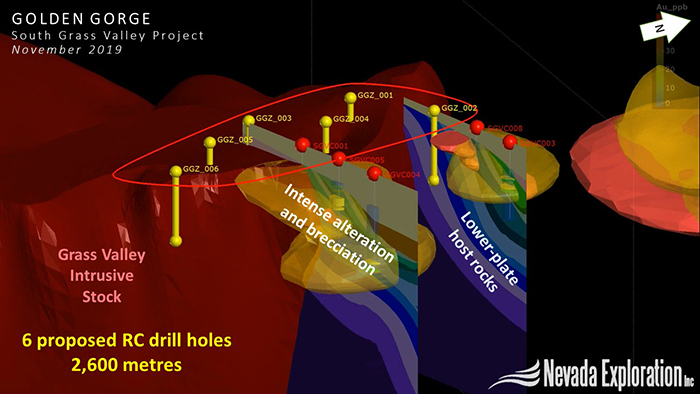 The Company considers success for this next stage of work at Golden Gorge to be intercepting hornfels containing multi-phase silica-breccia, and secondary pyrite containing strong evidence for Carlin-type mineralization, including highly-anomalous gold and pathfinder geochemistry.

Waterfall is located along a series of SE-plunging folds at the projected intersection of high-angle, district-scale, NW and NE-trending faults, within the projected extension of the lower-plate bedrock encountered in the drill holes to the east, as well as seen exposed to the south, which the Company believes are likely to be in contact or closely associated with the Grass Valley Stock.  The geochemical support for mineralization at this particular intersection of favourable geology is driven by the evidence, based on 3D modeling, that the high concentration of gold in groundwater centred over the Golden Gorge target includes a contributing component that originated from the southwest, from the direction of the Waterfall target.  In addition to the gold in groundwater, there is also geochemistry support in the soil samples across the western part of the target, where there is a discrete zone of elevated arsenic.

The concept to test at Waterfall is that of fracture-controlled mineralization within hornfelsed lower-plate, emplaced along the folds, similar to that at the latest Fourmile discovery at the north end of Grass Valley.  To advance the target, NGE is proposing a 7-hole RC drilling program, for a total of 2,500 metres to establish what looks to be the irregular geometry of the interface between the lower-plate and the Grass Valley Stock, and to test this geologic setting for the mineralized bedrock source of the high gold in groundwater seen above and downstream of the target. 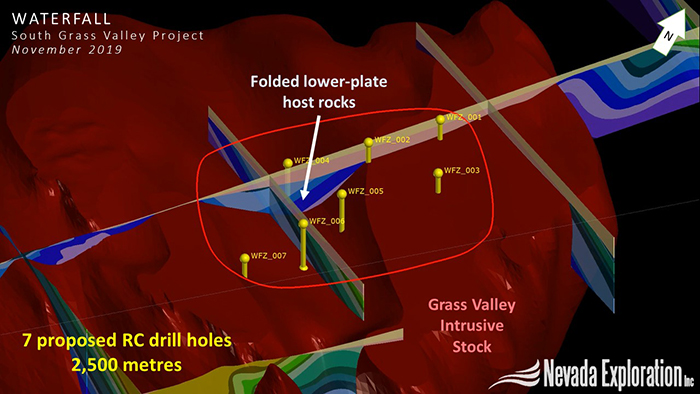 Success for this next stage of work at Waterfall will be defined by encountering direct indications of Carlin-type gold mineralization in bedrock that focuses our search to structural, rheological, or stratigraphic controls associated with gold and its related pathfinders.

Freddie is located to the northeast of Goodwin Butte, in an area where initial drilling defined large zones of sulphide-bearing, silicified breccias within silty carbonate units showing evidence of low-angle thrust faulting.  These lower-plate carbonate rocks sit below a shale cap rock at the intersection of high-angle NNW and NE district-scale faults along an antiformal fold hinge, as seen in outcrop at Goodwin Butte and in initial oriented-core drill holes.  Together, these features represent characteristic host rocks and mineral controls for Carlin-type mineralization, which are supported by the elevated gold and related pathfinders contained in the silicified breccias encountered during drilling.  In addition to the drill samples, there is also strong geochemistry support in soils and groundwater: the biggest and strongest mercury and arsenic anomalies in soil sit immediately above the target; and the groundwater sampling encountered notable increases in gold, thallium, and arsenic in the groundwater flowing past the target.

The concept to be tested at Freddie is that of oxidized, silicified breccia-hosted gold mineralization, analogous to the mineralization at Goldrush.  To advance the target, NGE is proposing a 5-hole RC drilling program, for a total of 2,200 metres, to determine the extent and controls of the silicification, and to test the up-plunge extension of the pathfinder-bearing breccias seen in holes SGVC009 and SGVC011 for higher-grade mineralization. 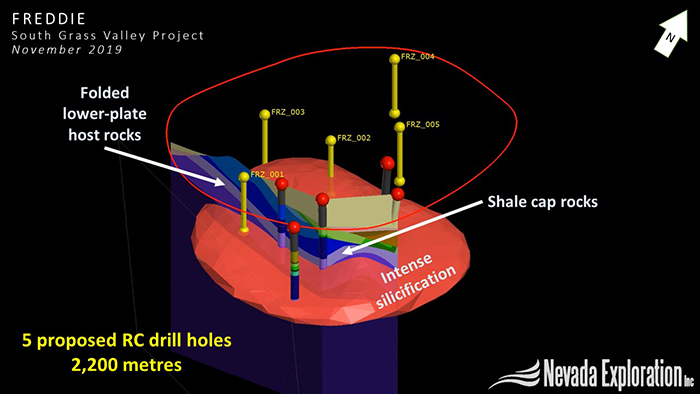 The Company considers success for this next stage of work at Freddie to be intercepting Carlin-type mineralization and/or major silicification containing gold and related pathfinders.

By integrating hydrogeochemistry and early-stage low-cost drilling with conventional exploration methods, NGE is overcoming the challenges and radically reducing the costs of exploring in Nevada’s covered basins, and is taking significant steps to open this important new search space for district-scale exploration.