Nevada Exploration Inc. (“NGE” or the “Company”) (TSX-V: NGE; OTCQB: NVDEF) is pleased to provide an update on exploration activities at its South Grass Valley Project (the “Project”).  Following up from the successful Phase 1 core drilling program the Company completed earlier this year, NGE is now drilling its second deep (>600 metre) diamond core hole of its spring–summer 2019 field program, representing another step-out to the north along the extension of the mineralized Carlin-type hydrothermal system discovered by the Phase 1 program.  Based on the geologic logging and assays received to date from these new drill holes and the results of the Phase 1 program, NGE believes that it has defined a large blanket of silicification at South Grass Valley, with a strike length of more than three kilometres, that is consistent both in terms of size and architecture with the zones of silicification surrounding large Carlin-type gold deposits (“CTGDs”) within the Carlin and Battle Mountain–Eureka trends.  NGE’s hole SGVC011 is currently ongoing and presently drilling through a multi-phase silica-sulfide breccia, starting at 630 metres and continuing to at least 770 metres, indicative of the characteristic hydrothermal processes associated with CTGDs in Nevada. 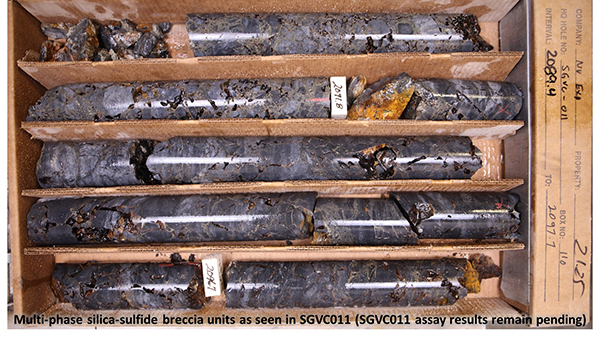 Discussing the ongoing program, Wade Hodges, NGE’s CEO: “Large CTGDs cannot exist without affecting large volumes of adjacent bedrock.  With our latest drill holes, we have direct evidence that suggests 1.8 cubic kilometers (and likely more) of lower-plate bedrock, the characteristic host rocks for CTGDs, has been highly altered and mineralized by pregnant Carlin-type hydrothermal fluids.  This incredible volume of altered and mineralized bedrock simply cannot exist without major, complex, and long-lived fault zones having acted as a plumbing system to move mineralizing hydrothermal fluids to and through these rocks.

“Carlin-type hydrothermal fluids will deposit silica, gold, and related pathfinder elements when they move upwards and encounter changes in pressure, temperature, and chemical conditions.  As this depositional process continues the silica tends to seal off the conduits that have moved the fluids.  With nowhere to go, the fluids build up pressure until they are released and form a breccia, often triggered by a structural or tectonic event, at which point, the fluids rise again, depositing silica and gold-bearing pyrite until the conduits are sealed off once more.  What ultimately builds up the gold grades associated with large CTGDs is the repeated focusing of this process within the same volume of suitable host rock.  What we’re seeing in our drilling at South Grass Valley is this exact type of multi-phase Carlin-type process over a large area and it’s very exciting.  This is the size and quality of Carlin-type hydrothermal system we’ve been looking to define at the early stages of the Project, and we’re extremely pleased to be able to share that we’ve reached this milestone, at what is a camp-scale target, with less than a dozen drill holes.  Our exploration program remains ongoing at the Project, and we look forward to updating our stakeholders as the new datasets improve and refine our exploration model.”

The spring–summer 2019 field program is following up from the Company’s recently completed eight-hole Phase 1 program at the Project.  The first diamond core hole of this follow-up program, SGVC009, was a 540-metre step-out to the northeast of the northernmost Phase 1 drill holes.  As described in the Company’s June exploration update (see news release dated June 27, 2019), the bottom of SGVC009 contained the most intense multi-phase silicification and secondary pyrite seen to date at the Project.  However, the hole was stopped prematurely due to difficult drilling conditions at 621 metres.

Based on these significant features seen at the bottom of SGVC009, NGE continued to step out towards the north, locating SGVC010 400 metres northwest of SGVC009, with the objectives of: (1) continuing to test the northern extension of the Carlin-type hydrothermal system encountered by the Phase 1 drill holes to the south, as well as (2) establishing more information about the vertical extent of the silicification now seen in most of the drill holes.  Unfortunately, SGVC010 also encountered difficult drilling conditions and was abandoned at 348 metres shortly after encountering altered, lower-plate carbonate host rocks.  NGE immediately offset SGVC010 with SGVC011, located on the same drill site.  SGVC011 remains in progress, currently at a depth of 770 metres, and importantly is again into bedrock that contains intense multi-phase silicified breccia and secondary pyrite – even more so than seen in the bottom of SGVC009.  The Company plans to keep drilling SGVC011 deeper as long as the bedrock continues to exhibit significant alteration, brecciation, and mineralization, provided drilling conditions permit.  It should be noted that the difficult drilling conditions encountered in the recent drill holes are typical in areas of complexly-broken bedrock commonly encountered in and around large CTGDs.

The combined drilling results highlight a consistent sequence of alteration zoning across the Project, specifically with a generally oxidized upper argillic cap zone, characterized by calcite veining, bleaching, decalcification, clay alteration, and dissolution brecciation that transitions to silicification with depth.  Ten of the eleven holes encountered this transition, and seven of these drill holes continued deeper into pervasive silicification, marked by multi-phased silicified breccias with black, sooty, secondary pyrite.  The consistent alteration zoning with depth throughout the drill holes suggests a large blanket of silicification extends N-S along the axis of the Project for a length of at least 3,500 metres, with a likely width of more than 1,000 metres.  Reviewing the drill assays for these drill holes, the geochemistry defines a pattern of anomalous CTGD pathfinder elements scattered throughout the upper argillic cap above the silicification, then increasing concentrations of gold and CTGD pathfinders once into the silicification.  The alteration, geometry, and associated geochemistry of this extensive blanket of silicification that extends through the favourable lower-plate host rocks at South Grass Valley is typical in terms of its size and architecture with the zones of silicification surrounding large CTGDs within the Carlin and Battle Mountain–Eureka trends, and is consistent with the scale of Carlin-type hydrothermal system required to support significant CTGD mineralization.  While the blanket of silicification sits relatively deep in the drill holes to date, the structural interpretation of the E-W oriented drill fences shows that this feature dips towards the east, and is likely present at shallower depths (closer to the surface) towards the west. 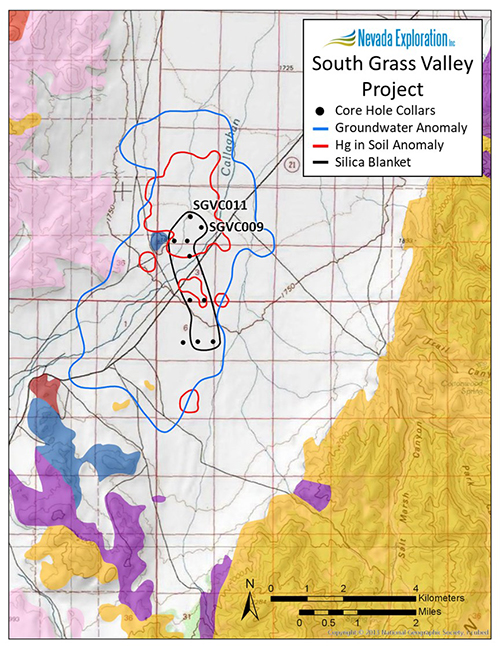 In terms of assay results for the latest drill holes, the Company has received all results from SGVC009.  As described in more detail in the Company’s news release dated June 27, 2019, SGVC009 entered a sequence of lower-plate carbonate rocks at 412 metres, beneath alluvium on top of Tertiary ash-flow tuff, volcanic mudflow breccia, and other volcaniclastic sediments.  Importantly, the mudflow contains cobbles of rounded volcanic, upper plate, and lower plate rocks, as well as more angular fragments of silicified breccia containing anomalous gold and CTGD pathfinders that are identical to the silicified breccia units seen at the bottoms of many of the drill holes.  The features of the breccia fragments indicate that they have only travelled a short distance, which is significant because it further suggests the mineral system extends upwards, closer to the surface, towards the west.  The first bedrock unit encountered in SGVC009 at 412 metres is clay-altered, bleached, and oxidized Roberts Mountains Formation.  At 570 metres the alteration abruptly changes to silicification, which intensifies with depth.  Consistent with the earlier drill holes, gold and CTGD pathfinder concentrations in SGVC009 increase with depth together with the intensity of the pyritic, multi-phase brecciation.  In addition to the geochemistry and geologic logging, oriented core measurements have added considerable new information about the orientation of bedding planes, structures, and veins, and their relationship to the changes in lithology and alteration.  This new information is guiding an improved understanding of the structural geology at the Project, which is a primary control for mineralization, and which will be an important input for the next phases of exploration.  A down-hole strip log for SGVC009, including lithology, structure, alteration, and assay results for gold plus the CTGD pathfinders, as well as core photos, is available at: http://www.nevadaexploration.com/_resources/SGVC009_Data_Package.pdf?v=0.399.

In parallel with the core drilling program, the Company has also begun its next phase of groundwater sampling at the Project to: (1) improve the resolution of its hydrogeochemistry data above and proximal to major structural features across the primary target area; and (2) extend its data coverage south of the main target area, over the projected extension of the Carlin-type hydrothermal system discovered by the Phase 1 drill program.  To maximize sample coverage, at this time the Company is using its smaller borehole equipment, rather than its larger Scorpion drill rig, because the smaller equipment is able to collect samples more quickly to cover a larger area.  So far, NGE has completed 30 additional boreholes, from which it has collected a total of 73 new groundwater samples.  Preliminary results from field-measured parameters are encouraging, and NGE expects to continue the groundwater sampling borehole program into August. 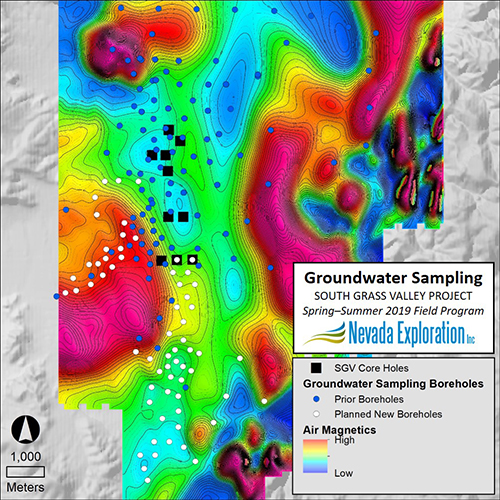 Also, as outlined in the Company’s news release dated May 16, 2019, building on the success of the Company’s initial soil mercury program in complementing its hydrogeochemistry data to domain the Project and focus exploration efforts, NGE has begun a large follow-up program to significantly increase its soil mercury sample coverage.  The objectives of the program are to: (1) infill the existing sample lines by reducing line spacings from 400 metres to 200 metres – consistent with the sampling strategy used to define the soil-mercury anomaly over Cortez Hills; and (2) expand sample coverage to the north and south, along the projected extension of the favourable geologic features seen in the Phase 1 drilling.  The planned program consists of 18 additional sample lines consisting of more than 1,800 new samples, effectively doubling the previous coverage.   Through July, the Company has now collected 1,440 of the samples. 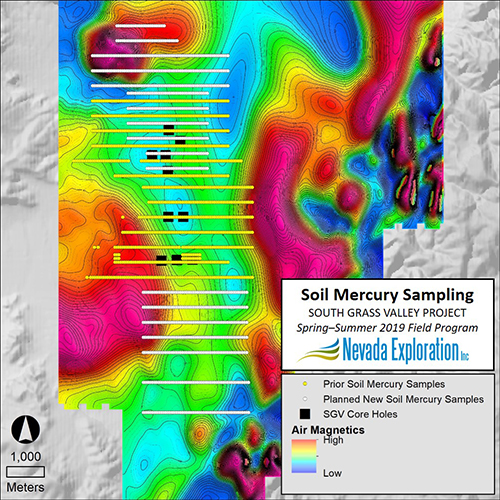