Discussing the progress, NGE Chief Discovery Officer, Wade Hodges: “The objectives of our most-recently completed drillhole, SGVC014, were to test for mineralization within the metamorphic aureole of the Grass Valley Stock, and in particular within the deeper Hales Formation where the flow of mineralizing hydrothermal fluids may have been trapped by the intrusive stock to the west and the Goodwin Formation above – a place that represents a particularly good setting to host Carlin-type mineralization. 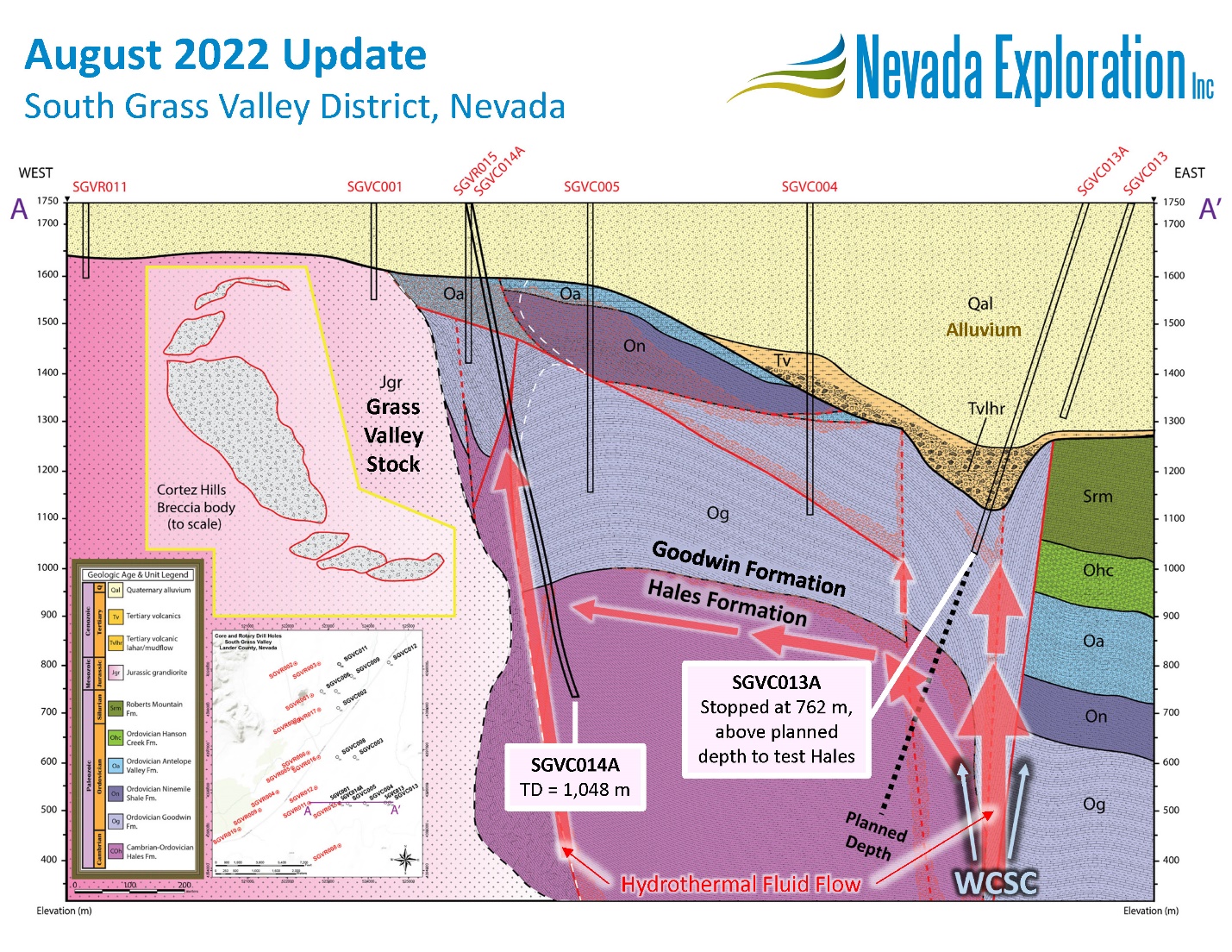 “Based on our logging, while we see two of the critical features we were looking for – namely thick sections of metamorphosed lower-plate cut by structures hosting intense alteration, oxidation, and highly-anomalous pathfinders – what we don’t see in SGVC014/A is sufficient widespread structural preparation or damage needed to break these brittle hornsfelsed and marbleized units and increase their permeability to allow mineralizing fluids to move outwards beyond the confines of the structures into the surrounding host rocks.  What we’ve learned with SGVC014/A is that in this southern area of the project we need to move further outwards from the intrusive, closer to the Water Canyon corridor.

“With each drillhole, the importance of structural features in controlling hydrothermal fluid flow through our system is becoming increasingly evident, and our need to better understand the location and nature of the structural geology at South Grass Valley has driven a year-long initiative to update our geologic model.  This effort has included relogging our earlier drillholes, in many cases re-assaying them to ensure we have a consistent geochemistry dataset across the project, and today we are pleased to publish this updated model for our stakeholders to review directly, together with a narrated video tour.

“The main takeaways have not changed: we’re looking at a highly permissive host unit, the Hales, sitting under a less-reactive cap rock, the Goodwin, along a deep-seated regional-scale structural corridor, all of which come together along the margin of a Jurassic-aged intrusive stock in a location where we see highly anomalous gold and pathfinders in bedrock, soils, and groundwater.  What is new is an improved understanding of how the stratigraphic units relate between drillholes, which we are now using to better project where the major structures intersect the Hales to target these places of high potential with our next drillholes.”

The planned upper portion of SGVC013A intersected a series of high-angle shear zones and massive damage zones within the lower-plate Goodwin Formation, marking the top of the targeted Water Canyon structural corridor (“WCSC”).  These structures host a series of hydrothermal breccias consisting of a sulfidic matrix containing highly silicified transported fragments believed to have been forced up from the Hales Formation below, the primary host unit at the project.  Due to challenging drilling conditions, SGVC013A was stopped at 762 metres, before reaching its planned depth designed to reach the Hales.  While drilling in this location has not yet provided samples from the Hales, NGE has received all lab assays from SGVC013A and has completed its pXRF geochemistry review of the major structural features.

Lab assays from 1.5-metre sample intervals of the Goodwin show generally low concentrations of Carlin-type pathfinders, including low gold values, consistent with this unreactive bedrock unit supporting limited lateral hydrothermal fluid flow.  The review of the fracture-controlled breccias and other structural features cutting through the otherwise-unaltered Goodwin has confirmed the presence of highly anomalous Carlin pathfinders, including seven discrete features containing >1,000 ppm arsenic (pXRF), plus another 1.5-metre lab sample collected across a similar fracture feature reporting 0.17 ppm gold (lab), which support NGE’s plans to return to complete a deeper hole in this area to test where these mineralized structures cut through the Hales Formation below.

NGE believes the major geologic takeaways from the 762 metres drilled to date in this location are:

NGE began drilling SGVC014 in March 2022.  The drillhole was stopped at 574 metres due to broken ground conditions that sheared the drill rods; after which the drillhole was redrilled and sampled from 438 to 1,048 metres as SGVC014A.

As released previously, SGVC014/A encountered the expected sequence of structurally complex lower plate bedrock exhibiting high-grade thermal alteration in the form of coarsely recrystallized limestone (marble) and recrystallized silt and mud (hornfels), consistent with the drillhole’s location along the margin of the Grass Valley Stock, as predicted by NGE’s geologic model.  The fractures and fault zones show evidence of being exploited by multiple periods of hydrothermal fluid flow, with intense oxidation and argillic alteration associated with highly anomalous pathfinders.  NGE’s objective for the bottom portion of SGVC014A was to continue the drillhole deeper to test for evidence of more pervasive fluid flow and mineralization where these structures intersected the Hales Formation below.

SGVC014A entered the targeted Hales Formation at 805 metres, which continued until the bottom of the drillhole at 1,048 metres, providing a 243-metre-thick sample of the Hales below the Goodwin contact.  Notably, once into the Hales, SGVC014A encountered discrete zones containing significant concentrations of diagenetic and remobilized pyrrhotite (magnetic pyrite) and arsenopyrite, potentially marking subunits within the Hales especially receptive to Carlin-type mineralization, which may explain the presence of layers within the Hales seen in earlier drillholes hosting significant increases in alteration and pathfinders.

Though the Hales represents a highly favourable Carlin-type host unit, SGVC014A encountered little evidence that it supported pervasive hydrothermal fluid flow in this area of the project, other than localized within structural features.  The Company believes this reflects the high degree of thermal metamorphism due to the proximity to the Grass Valley Stock, which sealed off the primary permeability of the rocks, that was not then followed by sufficient structural damage to provide the secondary permeability to allow for significant hydrothermal fluid flow in this location.  Based on these observations the Company terminated the drillhole at 1,048 metres.

While NGE is preparing to submit samples for assay, initial logging does not suggest SGVC014A drilled through a major Carlin-type deposit; however, the Company continues to believe that this area of the project - where the Hales is constrained by the Grass Valley Stock to the west and the WCSC to the east - represents an area of high potential.  NGE expects to target future drilling in this area further east where the intensity of the metamorphic effects diminishes away from the intrusive, and the structural rock preparation increases closer to the WCSC.  While still under review, the initial interpretation of the downhole UV fluorescence data from SGVC014A has identified a fabric of fugitive trace-element-rich calcite veinlets understood to be related to outflow fluids from Carlin and other carbonate replacement deposits, which is consistent with SGVC014A being located peripheral to and downstream of the environment of potential gold deposition further towards the east.

The Company’s major geologic takeaways from SGVC014/A are:

In parallel with its Phase 3 drill program, NGE has been working on a major update of its geologic model to improve the resolution of its geologic and structural understanding to identify the locations of highest potential to host a globally significant Carlin-type gold deposit.

These new inputs have allowed NGE to standardize the logging from all drillholes for the purpose of fine tuning the location of the contacts between major bedrock units to improve NGE’s understanding of the structural geology across the project.  The Company has published the resulting updated geologic model, including seven new cross sections, within its latest interactive 3D VRFIY model available here:

Compared to the Company’s last major update in early 2021, the main geologic features of significance in the new model remain unchanged; namely:

Building on this consistent geologic framework, the new data adds several layers of evidence that the dominant controls for hydrothermal fluid flow across the project were more structurally related than stratigraphic, and potentially more vertical than horizontal, which would be expected to directly influence the geometry of potential deposits at the project.  When reviewing other deposits in the area, these features would be expected to support more vertically oriented deposit geometries such as Cortez Hills, rather than more horizontally oriented geometries such as Goldrush.

Based on this latest geologic and structural modeling, for its next drillholes NGE plans to target areas where it projects the favourable host rocks, hydrothermal fluid pathways, and structural rock preparation to have come together, specifically at the intersections of large structural features and the Hales, to be prioritized based on where the Hales is believed to have been brought closer to the surface to minimize the need for deeper drillholes.

With mature, exposed search spaces seeing falling discovery rates, NGE believes the future of exploration is under cover.  Nevada’s exposed terrains have produced more than 200 million ounces of gold, and experts agree there is likely another 200 million ounces waiting to be discovered in the half of Nevada where the bedrock is hidden beneath post-mineral cover.  NGE has spent more than 15 years developing and integrating new hydrogeochemistry (groundwater chemistry) and low-cost drilling technology to build an industry-leading, geochemistry-focused toolkit specifically to explore for new gold deposits under cover, and the Company is now advancing a portfolio of projects totalling more than 180 square kilometres.

NGE’s most advanced project is South Grass Valley, located approximately 50 kilometres south-southwest of the Cortez complex, operated by Nevada Gold Mines (Barrick Gold Corp. and Newmont Corporation joint venture), within the specific region of north-central Nevada that hosts Nevada’s largest Carlin-type gold deposits (“CTGDs”).  Based on the results of its combined exploration datasets, NGE believes it has discovered a mineral system at South Grass Valley with the architecture and scale to potentially support multiple CTGDs.  As the Company continues to advance the Project, per NI 43-101, 2.3(2), the Company must remind its stakeholders that the Project remains an exploration target for which the potential quantity and grade of any mineral resource is still conceptual in nature, and that it is uncertain if further exploration will result in the target being delineated as a mineral resource.