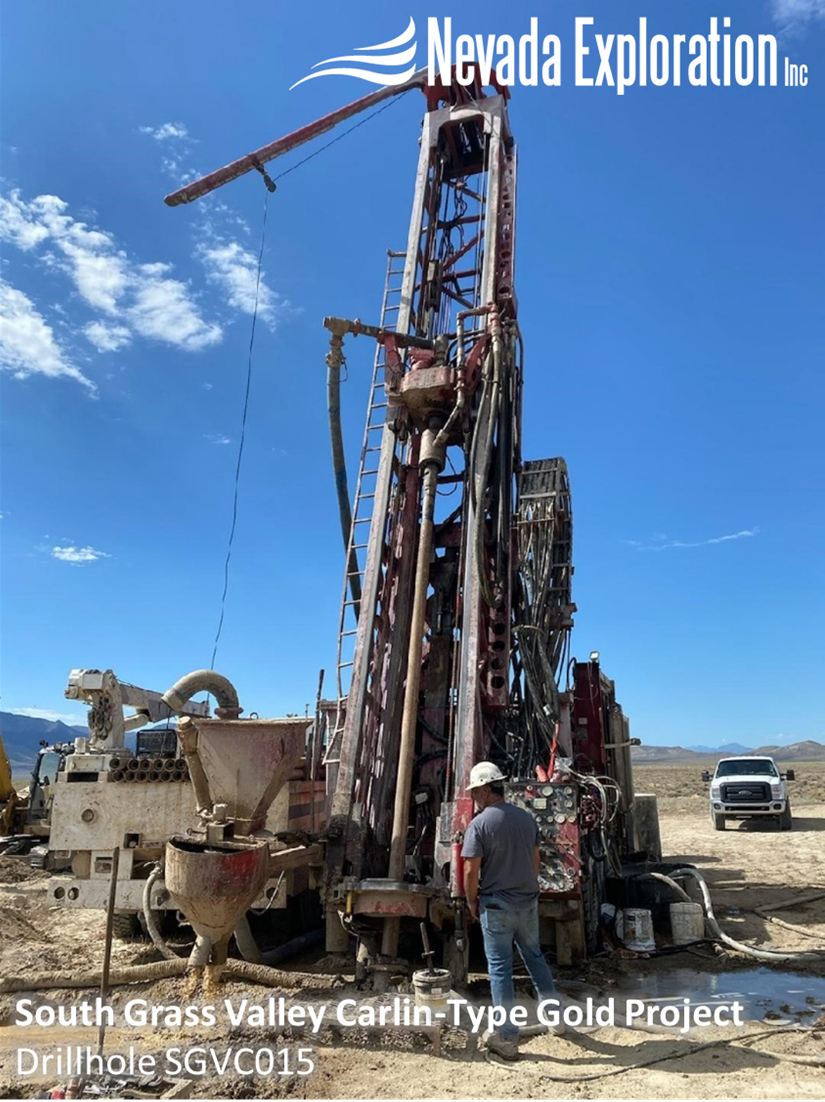 SGVC015 is located along the northernmost fence of drillholes at the project and is designed to test the intersection of a complex series of major NW-trending fault and fold zones connected to the primary N-S Water Canyon structural corridor (“WCSC”).  The drillhole is expected to fill a 1,200-metre gap between previous drillholes SGVC011 and SGVC012, and is specifically targeting the down-dip projection of a 430-metre-thick section of favourable Hales Formation seen in SGVC011 that contained intense argillization, silicification, and brecciation associated with highly anomalous pathfinders, in this case eastwards, closer to the WCSC, immediately below large gold and pathfinder geochemistry anomalies at surface. 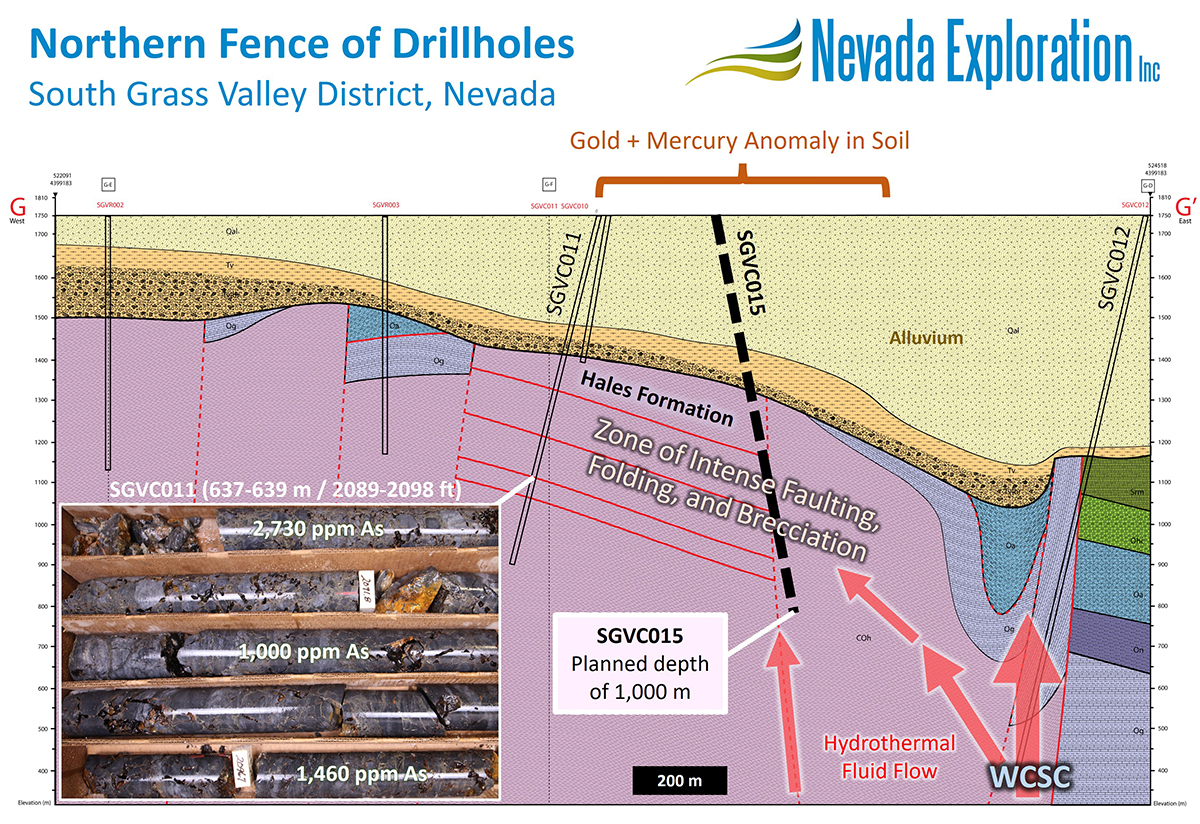 The Company’s North Grass Valley project is located approximately 13 kilometres south-southwest of Nevada Gold Mines’ Cortez complex.  NGE believes the work to date at North Grass Valley has established evidence that the complex structural controls associated with Cortez to the north are also present along the western edge of Grass Valley, coincident with potentially favourable host rocks and enriched concentrations of gold and supporting trace-element geochemistry in groundwater. 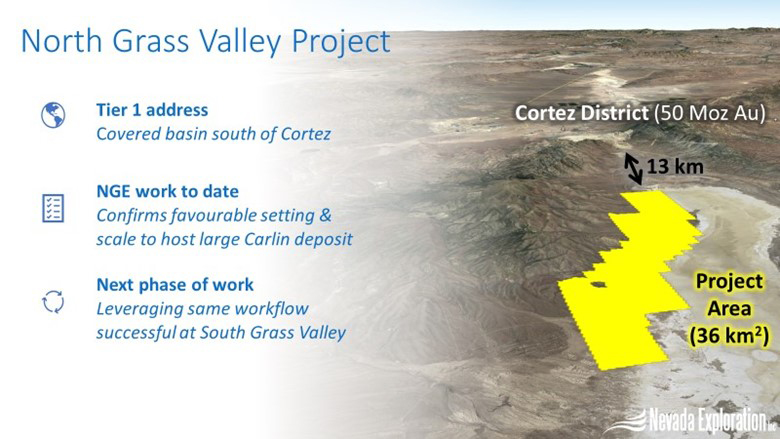 Based on the combined datasets, the Company believes that North Grass Valley exhibits the features to host a potentially gold-bearing hydrothermal system at a scale consistent with Nevada’s large Carlin-type deposits.  NGE has compiled all regional and project scale data at the project and has begun discussions with interested partners to fund the next stages of work at the Project.

At the Company’s Kelly Creek Project, NGE’s partner Austin Gold Corp. has informed NGE that during August it completed four reverse-circulation drill holes totalling approximately 1,200 metres in the southern portion of the project, and that the samples are being prepared to submit for assay.

NGE expects to provide additional information on the logging, assays, and other geologic information provided by the drilling once received.

In parallel to its Carlin-type gold projects, NGE has also been working to advance its epithermal-style Awakening gold project located immediately north of Paramount Gold Nevada Corp.’s Sleeper Gold Mine in Humboldt County, Nevada, which produced 1.66 million ounces from 1986 to 1996 and has a remaining measured and indicated mineral resource of 3.14 million ounces (297 Mt at 0.33 g/t Au).

Since acquiring the project, NGE and an early partner have completed large geophysics, geochemistry, and stratigraphic orientation programs to establish the major geologic features across the project.  Based on the results, NGE believes it has demonstrated support that the favourable lithological, structural, and alteration features associated with the mineralization at Sleeper continue northward, under relatively shallow cover at Awakening, coincident with anomalous gold in groundwater.

To consolidate what NGE believes to be one of the most prospective low-sulfidation epithermal gold projects in Nevada, NGE has entered an Exploration Lease and Option to Purchase Agreement (the “North Sleeper Agreement”) with a private party to purchase a 100% interest in 38 unpatented mining claims totalling approximately 3.5 square kilometres (the “S310 Claims”), that fill what was a hole in NGE’s land position.  Under the North Sleeper Agreement, the Company has the option to purchase 100% of the S310 Claims, subject to a 2% Net Smelter Return Royalty, for payments totaling USD$800,000 over nine years.  If the Company does not terminate the North Sleeper Agreement prior to February 7, 2023, a work commitment of 600 metres of drilling before February 7, 2024, becomes a firm commitment, after which if the Company elects to proceed, an additional 1,000 metres of core drilling is required to be completed prior to February 7, 2025. 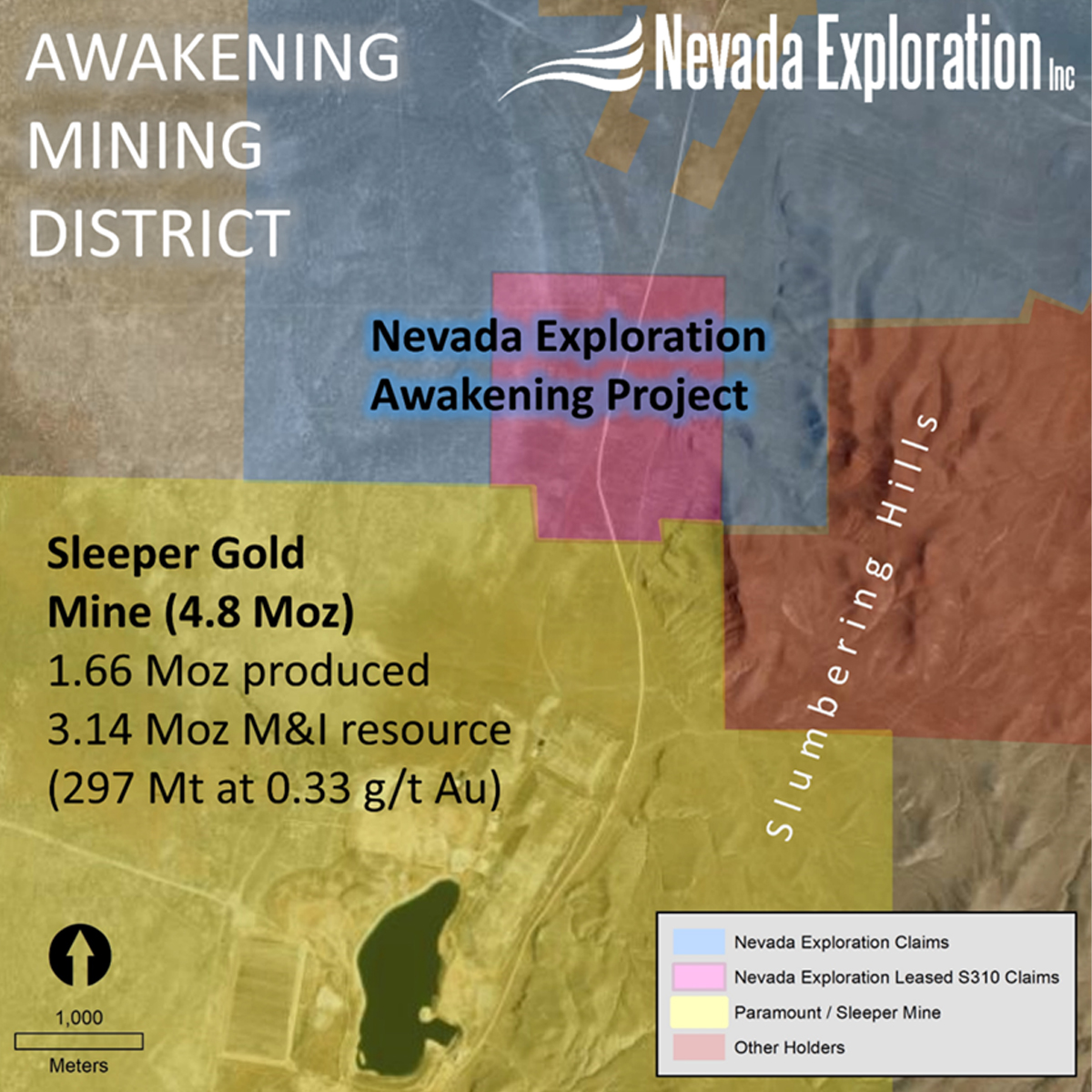 Together with completing the North Sleeper Agreement, NGE has finalized its Awakening data room and is preparing for discussions with interested partners.

NGE’s project portfolio is the result of a decade-long +$10M generative exploration program to explore for large new gold deposits in the more than half of Nevada where the prospective bedrock is hidden beneath large, covered valleys, which the industry believes contain another 200 Moz of gold.

The Company’s generative exploration program has been based on integrating conventional mapping and geophysical tools with hydrogeochemistry (groundwater chemistry) and low-cost drilling technology to build a geochemistry-focused, undercover toolkit.  The Company’s program has included sampling more than 2,000 existing boreholes, and permitting and drilling another +4,000 purposed-drilled boreholes to collect groundwater samples across many of the most prospective covered basins in north-central Nevada, which represents the world’s largest hydrogeochemistry exploration program for gold. 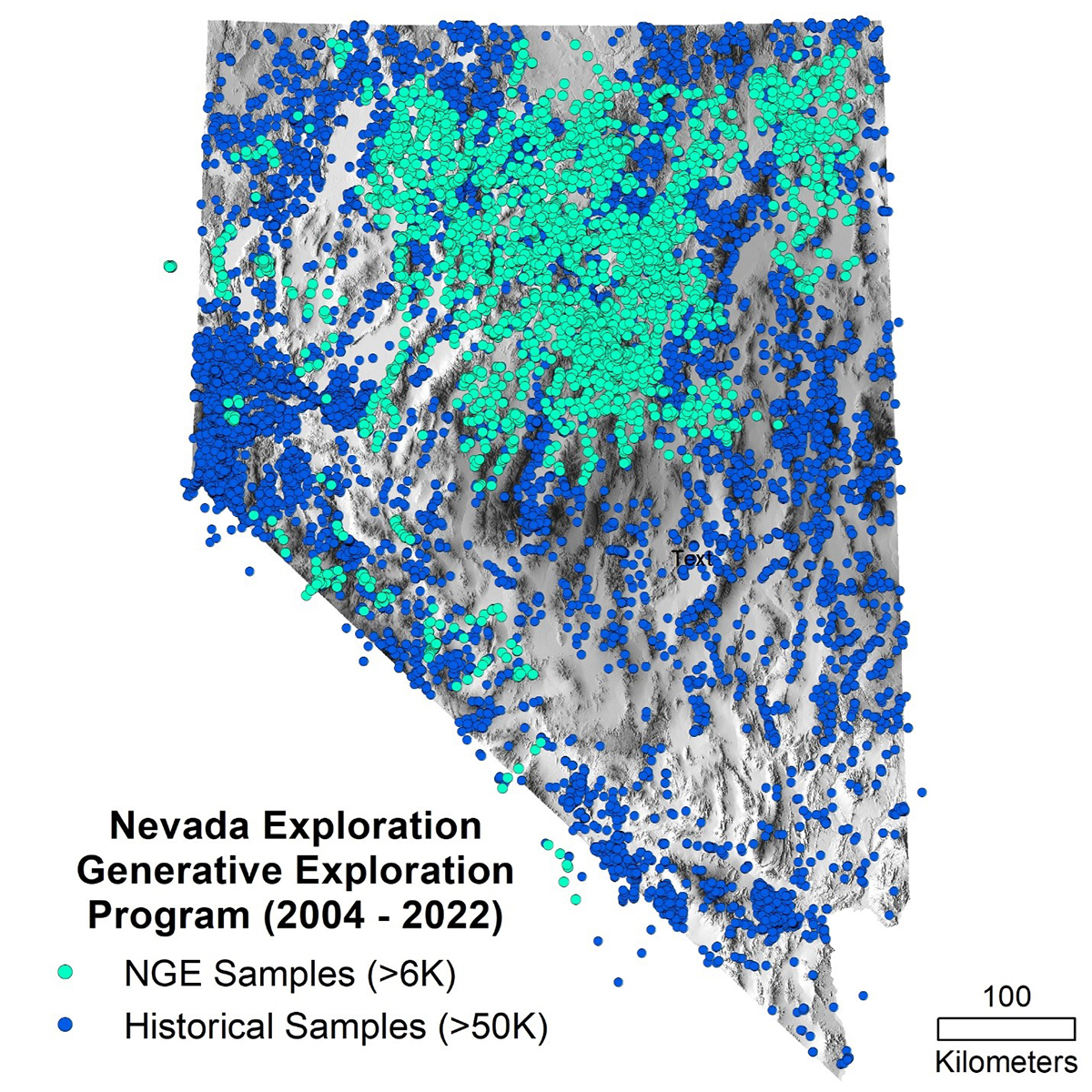 NGE’s current project portfolio is the direct result of this industry leading generative program.  To support its ongoing exploration activities at these projects NGE is seeking expressions of interest in the form of equity-based financings; sales of royalty and streaming rights; joint venture, option, and other project-based earn-in agreements; and other proposals.  While the Company is engaged in discussions with interested parties, in the absence of securing additional funding, the Company will not be able to pay the upcoming September 1, 2022, claim maintenance fees for a significant portion of its claim holdings, which would result in forfeiture.

In addition, there are known and unknown risk factors which could cause the Company’s actual results, performance or achievements to be materially different from any future results, performance or achievements expressed or implied by the forward-looking information contained herein.  Among the important factors that could cause actual results to differ materially from those indicated by such forward-looking statements are the risk that the Company does not receive any additional funding, or insufficient funding, to pay it claim holdings when due and as a result, these claim holdings will be forfeited and the Company will lose a material portion of its current assets; risks inherent in mineral exploration; environmental permits, the availability of needed personnel and equipment for exploration and development, fluctuations in the price of minerals, and general economic conditions.