Nevada Exploration Inc. (“NGE” or the “Company”) (TSX-V:NGE; OTCQB:NVDEF) is pleased to provide its March update from the ongoing exploration program at its South Grass Valley Carlin-type gold project (the “Project”).

NGE CEO, James Buskard: “As we shared in January, based on our latest geologic model we chose to carefully reorient SGVC013A to maximize our chances of intersecting the WCSC.  It was not easy, nor fast, but we have now successfully penetrated and sampled a 149-metre drill-thickness of what we believe to be the main fault corridor.  The early results validate our exploration concept and suggest that the drillhole is proceeding towards the source of the mineralized hydrothermal fluids, in the direction of our East Golden Gorge target.  Now that we are finished sampling the challenging WCSC above, we are preparing to drill a new deeper rotary pre-collar with core tail to maximize our chances of intersecting the targeted host rock, the Hales Formation.

“In parallel to preparing to drill deeper at SGVC013A, we have begun our next drillhole SGVC014, located 1.1 kilometres west, in the vicinity of the highest gold in groundwater we see at the Project, where the favourable lower-plate host rocks project closer to the surface, along the margin of the Grass Valley Stock.  The location of SGVC014 allows us to test two target concepts – exploring for Fourmile-style, structurally controlled high-grade mineralization within the metamorphic aureole of the intrusive stock, as well as testing the Hales Formation below, where it abuts the intrusive – so it’s an important drillhole and we look forward to sharing more as it progresses.” 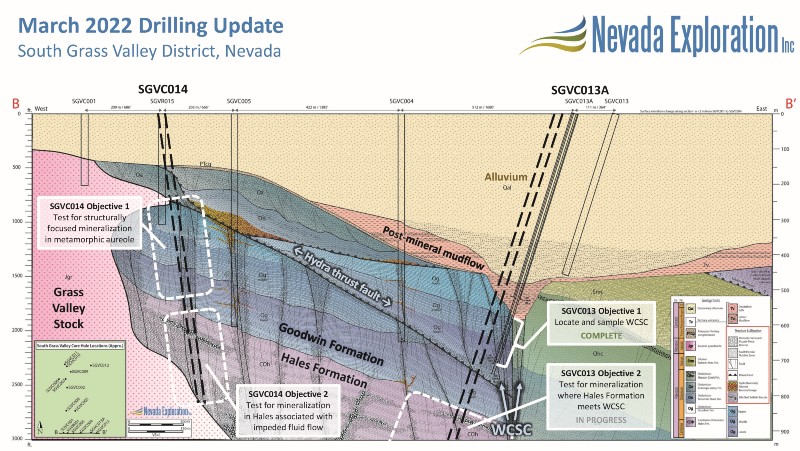 SGVC013A entered bedrock at approximately 500 metres, consisting of a volcanic mudflow unit seen in other drillholes and that appears to have filled a paleo-topographic low along the WCSC on top of the lower plate.  The mudflow has been shown to contain boulders of mineralized lower plate in several drill holes, and is interpreted to be post mineral, related to the nearby 34.0 Ma Hall Creek Caldera, which is significant in establishing that the age of mineralization at South Grass Valley is likely pre-34.0 Ma, consistent with Nevada’s three largest Carlin districts.

Beneath the mudflow, at approximately 610 metres, SGVC013A entered a series of high-angle shear zones in the lower-plate Goodwin Formation, defining a massive damage zone consistent with the size and location of the district-scale WCSC.  By successfully intersecting and sampling the WCSC, NGE achieved the first objective of SGVC013 to improve its structural understanding of the district. 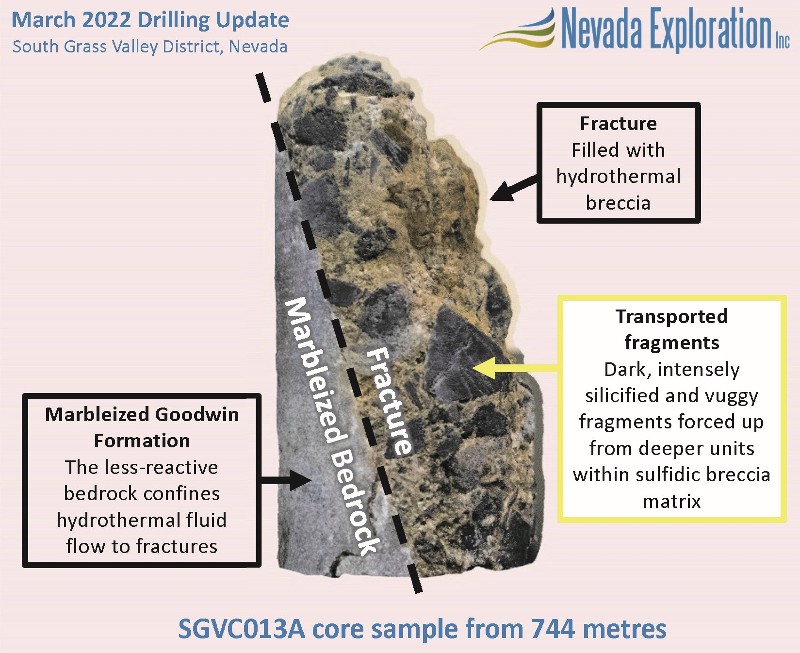 Based on conodont age dates, contact relationships, and regional stratigraphic position, NGE interprets the units below the Goodwin Formation to be early Ordovician to Cambrian Hales Formation (labelled “COh” in cross section above), which the Company had earlier described as Cambrian-aged limey mudstone (the “Clm Unit”).  NGE believes the breccias cutting through the Goodwin Formation include highly altered fragments of Hales Formation that have been transported from below along fractures.  These observations indicate the drillhole is heading closer to the source of the mineralized hydrothermal fluids and highlight the importance of continuing to drill deeper in this area.

Drilling at SGVC013A was terminated at 762 metres due to extremely challenging hole conditions.  Based on downhole acoustic televiewer data, NGE believes the drillhole has reached a major thrust feature NGE refers to as the Hydra Fault.  The geologic features seen in SGVC013A are consistent with the Company’s exploration model; however, continuing to re-enter the borehole cutting through the highly broken WCSC above complicated drilling and slowed progress.  Having completed the core drilling required to sample the WCSC, the Company’s drilling partner Drill NV is preparing to mobilize a deep-capacity RC drill rig to establish a new deeper collar through which the Company expects to resume core drilling to complete the next objective: testing NGE’s primary East Golden Gorge target for potentially economic gold concentrations where the Hales Formation intersects the WCSC at this southern end of the Project.